Post-Traumatic Stress Disorder (PTSD) is one of the most common disorders in the United States. In fact, 6.8% of the population will have PTSD at some point during their lives. And, about 3.5% have PTSD in any given year. While that means millions of people struggle with panic, stress, and the other symptoms of PTSD, it also means that millions of Americans are at significantly higher risk of developing complications – like addiction. 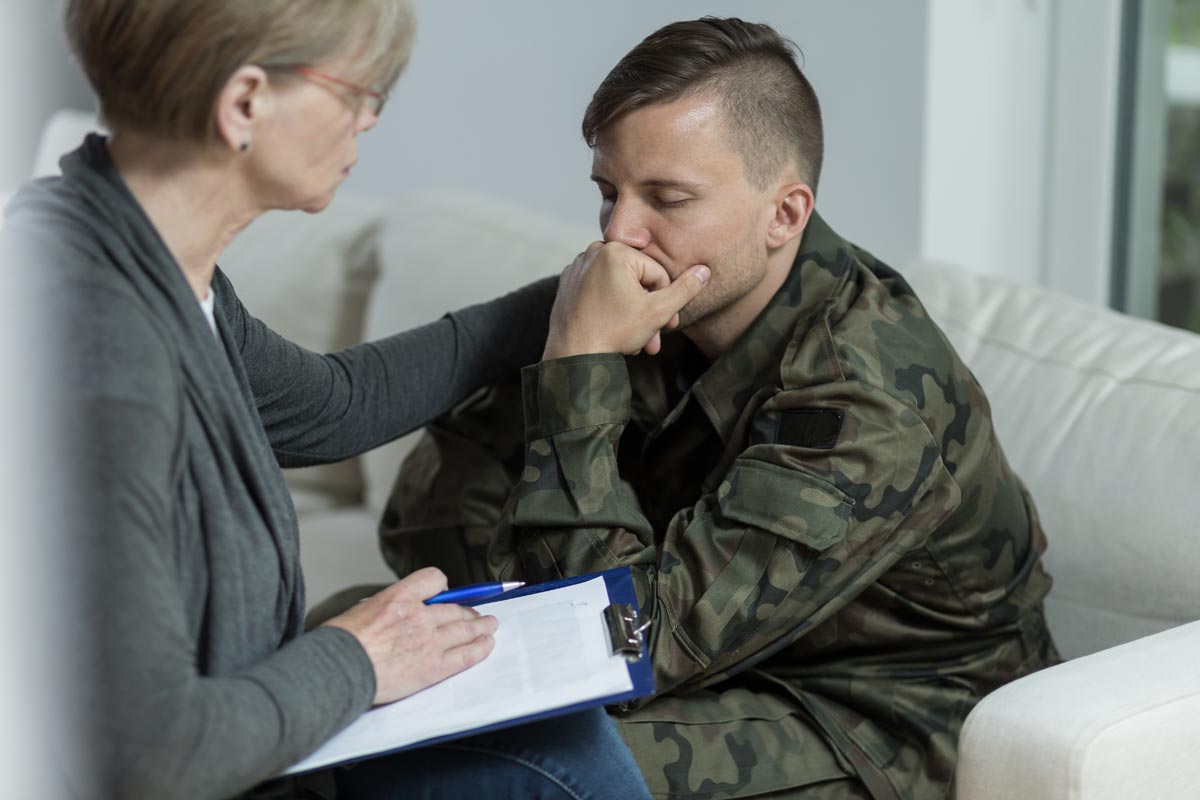 Post-traumatic stress disorder is a syndrome in which people become locked in a moment of stress, usually a severe loss of control or a life-or-death situation. This mental health disorder results in physical side-effects like increased cortisol production. In fact, the most defining aspect of PTSD is that the body continues to react as though it is in a high stress situation. Common examples include molestation, physical assault, car accidents, natural disaster, presence in a war zone, terrorist act, or spousal abuse.

Similarly, many people think of veterans and military service when they think of PTSD. War zones cause significant PTSD. 30% of veterans experience PTSD. That’s a high contrast to the 6.8% of civilians who do. But, the 38.5% of addicts with PTSD is a more significant correlation than either.

What Are the Symptoms of PTSD?

PTSD has a range of symptoms. However, the most common include:

It’s normal for someone to experience these kinds of emotions for a week or two after a traumatic event. Recovering from a car accident mentally takes much more effort than recovering physically in most cases. But, when side effects don’t go away and continue to persist, it’s crucial to seek out help. That’s true no matter how bad the event was. It’s also true if you’re not sure if there was an event. If you experience these symptoms, get help.

How Does PTSD Increase Substance Use? Reduced Support Groups – Individuals with PTSD are very likely to withdraw, often when they need that support the most. This means they’re less likely to benefit from the social support of friends and family. However, PTSD also increases incidents of antisocial behavior, meaning that some people with undiagnosed PTSD may alienate friends and family as well. This increases withdrawal and isolation, creating a self-defeating loop.

Negative Emotions – PTSD is strongly associated with mood swings and increases in negative emotions. These commonly include fear, repetition of traumatic events, stress, guilt, exhaustion, loneliness, and sadness. They’re also exacerbated by ongoing and rising stress, PTSD interfering with daily life, PTSD causing failure at tasks and commitments, and PTSD causing withdrawal. This results in feeling bad, reacting to that, and then feeling worse as a result. Eventually, individuals with PTSD can experience very severe mood swings where they go from normal to extremely upset with very little buildup needed.

Increased Risk Taking – Negative emotions and stress always lead to an increase in impulsivity. Eventually, this results in person with PTSD engaging in high risk-taking behaviors. This normally tracks to reduced serotonin and increased cortisol – pushing the individual to seek out happiness. That makes the individual more likely to impulsively drink or take alcohol, more likely to take risks, more likely to drop responsibilities, and more likely to make impulsive purchases and decisions.

Self-medication – Self-medication is the highest risk activity contributing to addiction. Here, people use drugs or alcohol to numb or reduce the symptoms of PTSD. That can start out as something as simple as having a beer when you get home from work, taking an extra Xanax because you’re having a panic attack, etc. But, it almost always escalates into larger use of symptoms. For example, when most people start to self-medicate, they don’t have a diagnosis. They use whatever they have at hand to numb symptoms. They don’t have a dose, a safe usage schedule, or medical checkups. This puts you at very high risk of chemical dependence, increased tolerance, and, eventually, addiction.

Eventually, all of these reasons overlap to cause a significant increase in drug and alcohol uptake for persons with PTSD. That also means you’re at significant risk of addiction. For example, an estimated 5.6% of PTSD patients are addicted to alcohol after a year with a further 7.7% experiencing chemical dependence but not seeking behavior within that year. The statistics also hold true for veterans. 1 out of 3 with a substance use disorder have PTSD. 20% with PTSD have a substance use disorder.

What is Dual Diagnosis Treatment?

Most dual diagnosis treatment takes a prioritization approach. Patients are treated in a residential facility, away from the ability to access drugs or alcohol. There, the most pressing or life-threatening problems are treated first. Physical substance use disorder, suicidal ideation, etc., are given the highest priority, because they pose a risk to your life and health. From there, motivational and resistance reduction treatment, behavioral therapy like CBT, and skills training to help you recognize and recover from the underlying causes of both PTSD and addiction.

If you or a loved one has a substance use disorder, it’s important to follow through with a full evaluation of mental health and needs. If you have PTSD, it’s important to assess substance use and reliance, to keep in touch with family and friends, and to regularly discuss your health with your doctor. Unfortunately, most people don’t recognize they have PTSD until well after it becomes a problem. That means you may need substance use disorder treatment as part of treating PTSD. If you do, there’s no shame in it. Millions of Americans struggle with substance use disorder. PTSD makes you more vulnerable. Taking time to get help and to recover from your disorders is the best possible thing you can do to get your life back.

If you have any questions about PTSD and Addiction or about drug and alcohol rehab programs, contact us today to speak in complete confidence with one of our experienced and caring addiction treatment team.